View all photos on Shutteryfly 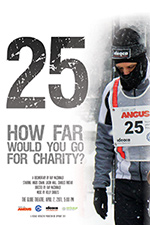 To celebrate the 25th anniversary in December 2010 of the annual CBC Food Bank Drive, Angus circled a 5km loop along the Bow River in downtown Calgary for 25 hours and in the process raised over $26,000 in support of the Children’s Milk Program at the Food Bank. There were a number of challenges including winter weather temperatures of -15C to -23C and long periods of dark due to the pending winter solstice. Plus, the night before the event, Angus came down with stomach flu and could not consume solid foods for many hours during the run. For the last 5 km loop, Angus was joined by 400 local runners and students in the annual “Amble with Angus”.